Ray Trejo is an avid sportsman and lifelong educator from Deming, New Mexico. He comes from a family of sportsmen and women and grew up hunting and fishing in Southwest New Mexico, with some of Ray’s fondest childhood memories coming from time spent in the backcountry of New Mexico’s bootheel, the Mimbres valley, the Gila river and the Gila National Forest. His passion for public lands, wildlife management and youth mentorship come from a life spent both inside and outside the classroom. Ray spent the last 26 years of his career as a public-school educator, 16 of those as an administrator. Ray attended Western New Mexico University in Silver City where he earned a Bachelor’s degree in education, a Master’s degree in Teaching and a second Master’s in Educational Leadership.

Through his time and experience working with youth, Ray has spent his life working to combine his work as an educator and sportsman to help inspire the next generation of conservationists in New Mexico. Ray has also served as past president of the New Mexico Wildlife Federation and has worked in partnership with several statewide sportsmen’s groups to promote public access, equitable tag reform and sound wildlife management practices. He was also instrumental in helping to create the Organ Mountains Desert Peaks National Monument. Ray lives in Deming, NM, with his wife Teri, three horses, one mule, his Jack Russel Terrier and three bird dogs. 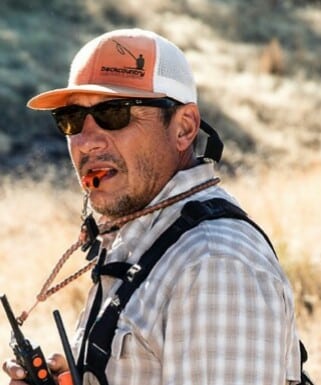